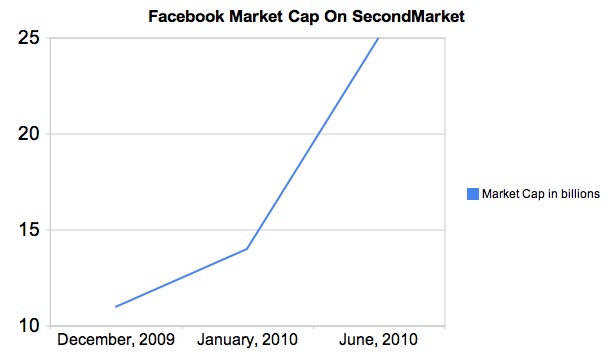 Private company valuations on SecondMarket (and other similar “exchanges”) make for great blog fodder, but I’m not sure I buy into the hype. The latest result for Facebook is a $25 billion valuation … for a company that celebrated being cash flow positive a year ago and has yet to turn a profit.

Queue the sock puppets and launch a black rocket. It’s 1999 all over again.

Let’s compare it to the actual values of public companies like AOL ($2.3 billion) and Yahoo! ($21 billion), as reported by TechCrunch today. Facebook at $25 billion without any real liquidity? I’m having trouble stomaching that one. Of course, I’m something of a skeptic, so take my opinions with a grain of salt.

END_OF_DOCUMENT_TOKEN_TO_BE_REPLACED

Microsoft and Yahoo! inked a 10-year search partnership in the United States, and they’re hoping to ride that deal around the world. The two technology companies are trying to chip away at search engine giant Google‘s market share in the space. If all goes well, Microsoft thinks the deal will close early next year, even though there are some regulatory hurdles to clear.

END_OF_DOCUMENT_TOKEN_TO_BE_REPLACED

I know it’s meaningless, but it’s still fun. I’m addicted to ValleyWag commenting, even more than I am to the other Gawker blogs. Well, today I picked up “Commenter of the Day” props on ValleyWag for a nice crack I made about the kid who hacked hopeful Veep Sarah Palin’s Yahoo! Mail account. A judge released the kid without bail, but forbade him to “own a computer or to use the Internet for anything other than email and classwork.” Well, I found two problems with this decision:

1. He can use the internet for e-mail. Did the judge specify whose account?
2. His next assignment for school: how to screw up a candidate’s vice presidential hopes and dreams.

And for that, I get asshole of the day respect.

Rupert Murdoch must have a hell of a strategy, because what he’s doing doesn’t seem to make a damned bit of sense. Yesterday, word got out that he is taking the Ottaway Newspaper chain off the market. With declining newspaper valuations– not to mention that Ottaway is one of the most profitable pieces of the Dow Jones empire (at least before they chopped it with a divestiture in late 2006)– this is probably not stupid. But, ValleyWag suggests that Murdoch is interested in picking up a piece of former internet giant Yahoo!.

Didn’t the Aussie learn something about new media when he bought MySpace, only to have it eclipsed almost immediately by Facebook? Yeah, smart. That was $500 million well-spent. So, now he’ll go after a Web 1.0 has-been, for some purpose that only he can understand. He’s either a genius or a complete moron. Buying MySpace and Yahoo! (which trail Facebook and Google) is like rooting for the Chicago Cubs or the Boston Bruins. You have to know that you’ll never hit the top.

But, Murdoch’s the rich one, not me. So, grain of salt and all that.