I will never understand why some countries insist on having their own currency. No, I’m not going to beat up on Canada right now. Even if it is small and only borders us, their economy is clearly developed, and the country does just fine with its crazy pictures of the queen. But, I am confused about Iceland and Sweden. Both make their own cash, as if the fucking Euro isn’t good enough. Even with its recent slide, the Euro has still pounded the shit out of the dollar, especially when you consider that €1 was worth only 50 cents when the currency was first introduce. Now, it’s well over a dollar and has been for several years.Lesson: Bet on Europe, even if they don’t have real work weeks.

END_OF_DOCUMENT_TOKEN_TO_BE_REPLACED

I love crazy signs, and I try to offend equally. I’ve served up crazy signs from New York, Montreal and Tallinn. Well, Stockholm is no exception. I have found some funny stuff while wandering these streets. Take a peek after the jump.

END_OF_DOCUMENT_TOKEN_TO_BE_REPLACED

I’m an equal opportunity offender. Since I’ve had funs with street signs in Canada, Finland and Reykjavik, it’s time to put my hometown on the chopping block! My wife and I went down to the East Village for breakfast on Saturday, and on our way home (barely missing getting stuck in the rain), I stumbled upon these gems.

They’re not all that clear– apologies– but I only had my blackberry camera handy. 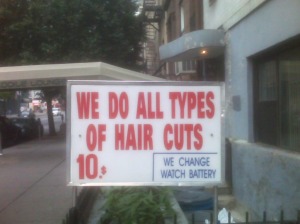 I guess they do it all. “All types of hair cuts” and watch batteries … what else is there? Well, the real question probably is: who’d go for either? 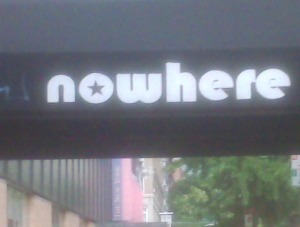 If you stand right beneath this awning, you’re in the middle of … oh, never mind. 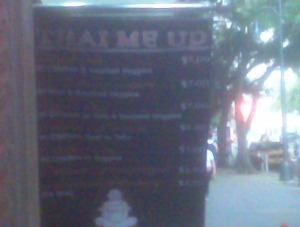 Thai Me Up! I suspect it’s just food, but if they ever need to expand, they’re ready.

Just who the hell is looking for a Dunkin Donuts in Helsinki? Seriously! That is one of the search engine expressions used to find the Migrant Blogger today. And, I thought only America runs on Dunkins.

Don’t get me wrong; I’m a big fan of Dunkins, as is my buddy Cyan from Zivity (I always love giving a bit of a shout-out to Zivity). They make the best coffee and doughnuts out there, though there are levels of quality across Dunkins stores. The product gets closer based on your proximity to Randolph, MA, where the company is headquartered.

I guess it did make sense for that wanderer to come here. I have some key stats about Dunkin Donuts in my life:

Does anyone else have a cool Dunkin Donuts story? To kick off the discussion, I leave you with my favorite, from No Shadow Kick. They are from the town where I, unfortunately, had to grow up, so they offer some great perspective. 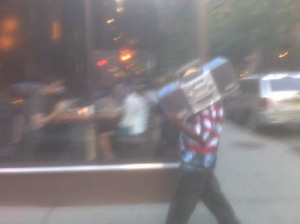 The Upper West Side is a pretty quiet place. I was waiting for my friend to arrive, just standing on the corner of W 70th St and Columbus Ave with my wife. Then, I heard the noise … it kept getting louder. There was a guy walking down the street with a radio on his shoulder, partying like it was 1989.

The picture is fuzzy because I only had my blackberry available, adn he was moving at a good clip. Hey, the music made him move. I get it. My second attempt at a shot, with my blackberry again, was even less successful. The first time, he was walking; I was not. The second time, we were both in motion, and I was following him. 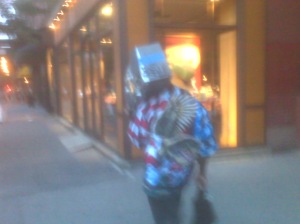 The best part of this whole experience is that they guy was playing music appropriate to his style of expression. It was old school breakdancing music. I half-expected him to throw down some cardboard and bust out some moves. Hell, I felt the urge to do so myself. But, I had neither cardboard nor moves to bust out. So, I stuck to my usual gig, walking around the neighborhood.

This was a nice treat from the norm in my part of the city. That’s why I love sitting here. Hang out on the stoop long enough, and you’ll see one of everything … and everyone.

This is like Manhattan’s version of my favorite street entertainer in Helsinki. 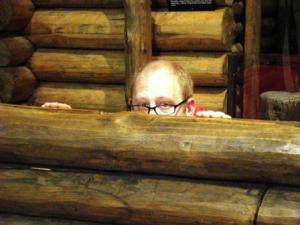 Airlines can’t even be nice without screwing up. My wife prefers window seats; I like the aisle. So, if we decide to sit next to each other, one of us suffers—which is the only way to describe a middle seat on an international flight. Generally, we try to sit in the same row, with my wife at the window, me at the aisle and possibly a stranger between us.

Retrospectively, it seems IcelandAir does not approve of this arrangement. When we tried to choose our seats in advance, the airline’s website automatically “upgraded” my aisle seat to a middle seat next to Laura. IcelandAir supports the preservation of the family and does not want to split couples. But, if we reserved seats in separate rows, the computer got the hint. So, one of us was to sit in row 18, the other in 19.

When we checked in at the IcelandAir desk in Helsinki, my wife and I confirmed our seats, telling the clerk that we were quite happy with what we had. I looked forward to a four-hour flight from Helsinki to Reykjavik with room for my legs. Of course, airlines are a cure for happiness, and my luck took a southward turn.

At the gate, the clerk printed slips of paper for my wife and me when scanning our boarding passes. Having noticed that we weren’t sitting together, the computer reshuffled the plane. My wife and I were moved to row 7, much further forward than rows 18 and 19. But, I knew immediately what this meant. I was relegated to a middle seat. I would lose my legroom.

The fucking Nordic oaf sitting in front of me felt the urge to recline, despite sitting in an exit row and having plenty of space in front of him. I responded by driving my knee into his back and shifting it frequently, causing him to look over his shoulder often … though failing to change his behavior. Meanwhile, the arrangement worked out for my wife. Laura still had a window, and there was no seat in front of her; she could stretch out her legs.

Of the many ways an airline could screw up, this is by far the most creative.

Finally, my review of the Klaus K hotel is available on TripAdvisor.com. Again, I absolutely loved that hotel. The rooms were quite comfortable, and the design was unbeatable. Also, I completely dug the lawn chairs out front where I could write and smoke in piece. One night, I was treated to a small fight between two drunken Finns!

Read the review on TripAdvisor.com >>

Enter the Mind of a Migrant Blogger
Blog at WordPress.com.