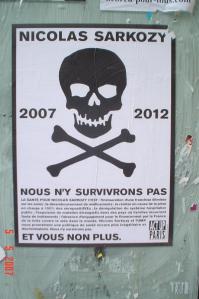 I just had dinner with a friend of mine who I see a few times a year. The poor bastard spends all year in Paris (boo hoo), where he teaches and is working on an advanced degree. I’m concealing most of the details to protect what little innocence he has. Well, between seeing R and having just gotten back from the road, I’m thinking about trips past, particularly what I saw. I’m not, by any stretch of the imagination, a photographer, but at least you can see the world through my untrained eye.

The last time I was in Paris, I had the good fortune of witnessing the presidential election that thrust Sarkozy into office (a good decision on the part of the French people). I got to go to an election night party (which was awesome) and generally feel the vibe of a world capital on election day. It was beyond exhilirating.

Oh, the poster above translates (as well I as I can) to: “We won’t survive this … and you won’t any more.”

I always have adventures in Paris. Every time I step onto the streets, which is where I feel very much at 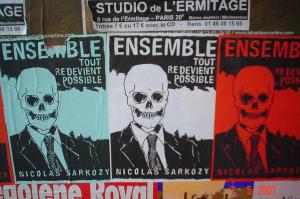 home, something cool happens. I’ll see something interesting, have a wild experience or just get some great fucking writing done. i wrote my article for Boink magazine, which seems like it was published so long ago (before I hooked up with XBIZ, let alone AVN). I remember the cafe vividly; it was right around the corner from the Intercontinental Hotel in Place de l’Opera, where I was staying (on my first trip).

Here are some shots of the campaign signs from the hotly contested Sarkozy/Segoline (I hope I spelled that correctly) bout. It was insane! The first one? “Together, anything is possible.” (again, to the best of my limited abilities) 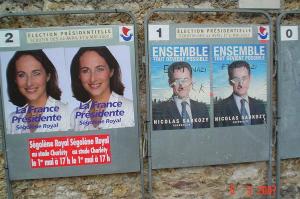 don’t see here. Some see it as degrading. I call it true democracy in action.

Written over Sarko’s face in the campaign posters to the right is “ETAT NAZI.” That’s a pretty powerful statement. These signs, if I remember correctly, were up in Montmartre. I spent a good week in that part of town and absolutely love it. In a way, it felt like my neighborhood, the Upper West Side. So, the next time I go to Paris, I’ll probably stay in Montmartre again, though not at the same hotel.

Okay, enough of the politics. It’s not really my thing anyway. I want to move to the crazy Parisians I 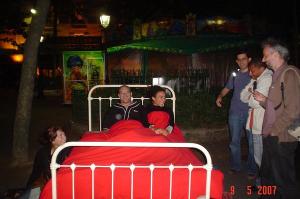 ran into. That’s where I had the most fun. For me, Paris is all about the people. I think I’m the only American who loves Parisians, but that’s fine with me. I think they are nice, open, polite folks, and I have always felt welcome in their hometown. I’ve spent about three weeks in Paris over the past few years, and I can’t wait to get back. I’m still exploring other places, but the pull of Paris remains quite strong. For now, it’ll have to wait, but I do plan to go back soon.

This chick’s deal was pretty straightforward. Her favorite storyteller believed in sharing his intimacy. So, she decided to move her bed into Place des Abesses in Montmartre (where I was staying) to share in the dead guy’s experience. It attracted weirdos. What a shock … 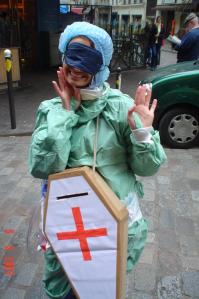 Of course, she wasn’t the only nutjob. I now introduce you to “the fiancee.” A nursing student who is struggling to pay for her honeymoon, she was led around the Quartier Latin by her friends. Those willing to help fund the experience dropped cash into the coffin around her neck.

I guess she wanted to go on a honeymoon pretty damned badly, because this is further than I’d go, and I really don’t have a whole lot of shame. I wore a dress to a movie theater once, though.

This is part of the reason why I dig Paris. The people are nuts, but in the happy way. You can walk the streets and always see something.

I thought this girl’s project was pure genius. It is equal parts clever, pathetic and entertaining. How can you not donate? I threw her a couple of Euros, adn I got to take a few pictures in trade. So, I think it worked out pretty well.

This wasn’t the only picture for which I paid. I liked keeping track of the various beggars around the 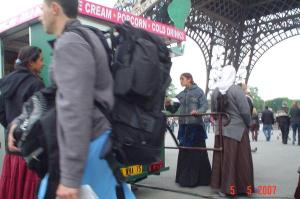 city, as they seemed particularly organized. On one occasion, I saw about 30 of them gathered outside Gare du Nord (one of the big train stations). It was like they were gathering before their shift.

Hey, even the beggars are unionized!

There was a pretty big concentration of them at the Eiffel Tower, which is the only reason why I found the tower interesting.

The pitch is pretty typical. A girl comes up to you and asks, “Do you speak English?” Regardless of how you reply, she holds a card open. It contains a sob story about being a refugee from Bosnia, the burden of several children, the absence of a husband, etc. Well, I’m not above paying for what I want. For the rich price of EUR2, I was able to get a shot of the card that she uses to pitch. But, when the camera was turned on her face, she became quite upset and tried to hide. 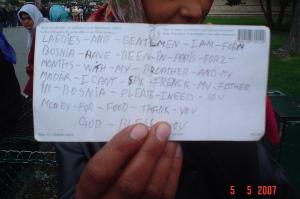 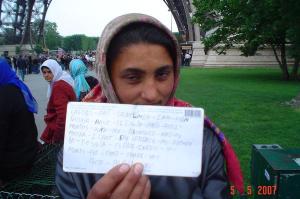