Well, yesterday was hectic. Laura and I hit the ground in Marrakech, checked into the Hivernage hotel and wasted no time getting into the old, walled part of the city (called the “medina”). This is where Marrakech comes to life. And, if you aren’t prepared for what you can see, this spot will intimidate the shit out of you. Of course, I had a map and didn’t think we needed a guide.

My advice to you: get a guide.

The adventure started out easily enough. I took a wrong turn out of the hotel and didn’t realize for a few long blocks that I was actually heading away from the medina. No worries, though … once we were oriented, I knew we’d be fine. The walk into the city took a bit, but it wasn’t brutal. After all, Laura and I live in Manhattan. We walk everywhere. I walk 50 blocks to day job every day. Getting into the medina was nothing.

The view from my balcony at Hivernage

The gate to the city (one of several, really) was not imposing. In fact, it seems pretty easy to get in. Getting out, on the other hand, is a different matter entirely. 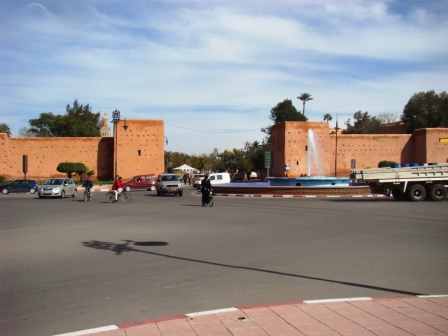 Early on, the results were positive. We found the Khoutoubia mosque pretty quickly. It’s hard to miss. At 77 meters tall, it’s the tallest building in the city, and no new construction is permitted to be higher.

It really is an impressive structure. The gardens around it were stunning, as well. I was surprised to see orange trees … and oranges on the ground. Like any leaf or acorn, they fall, and there are a shitload of them.

It was at the mosque that we also got our first taste of poverty in Marrakech. If you look closely in the picture below, you can see people hanging their laundry in the mosque’s garden.

Just inside the city from Khoutoubia, we found a genuine third-world experience. The roads were dusty and crowded. Mopeds whizzed everywhere and smelled disgusting. It looked like there was a long stretch of repair shops. I turned down an alley that looked interesting. It was populated by locals, and culminated in a dead end. We turned around and quickly returned to the main drag.

But, how bad can it be. The Harlem Globetrotters were here last year! 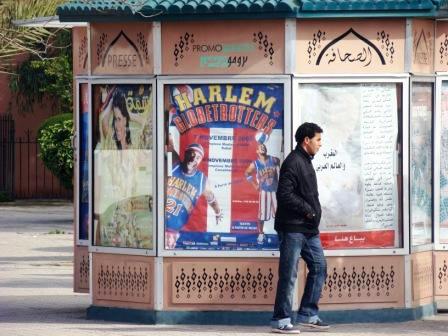 But, I doubt they would have checked out this part of town.

We spent the day never far from what we wanted to see … but never able to find it. The map was virtually worthless. Though it had streets labeled clearly, the streets themselves lacked signs. Of course, it’s hard to tell the difference between a street and an alley until it’s too late. So, we wandered the maze that is the medina, dodging two- and four-wheel vehicles while struggling to find a major road or natural sunlight. 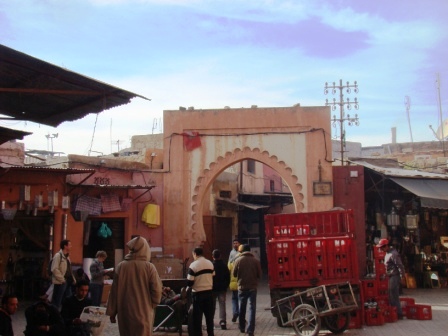 Yes, some of these alleys are covered. They are also very narrow.

I figured that I could use the minaret (tower) of Khoutoubia to orient myself, just as I used to use the John Hancock building in Boston. Well, that only works if you can actuallly see the reference point. This rarely happened.

In Marrakech, “blind” architecture is the predominate style. Buildings are constructed so that it’s impossible to get a sense of their size (or what’s inside) by looking at them. Since the alleys are the result, at least in part, of walls that used to belong to buildings, the style carries over to the city itself, and you can get a sense of where you are only rarely. 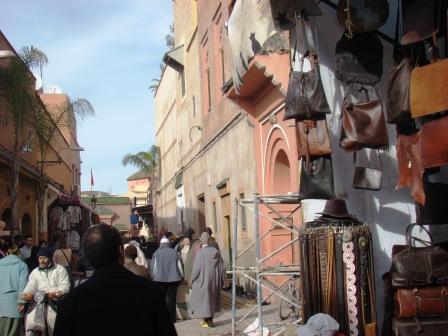 Along the way, we were harassed by young and old who wanted to be our “guides.” Really, this just meant that they wanted to take us to a particular souk (shop) that paid them a favorable commission. So, I spent the day shaking these people off the best I could. Ignoring them only worked if you picked up your speed. Occasionally, I’d yell at them in French, and they’d back off.

It took us a while to find our way out of the city, only to realize we were on the wrong side of it. So, we had a difficult choice to make. We could either cut through the city (the benefit of straight lines and such) or walk outside the wall and skirt the perimeter back to our hotel.

I consulted my map …

… and realized it was bullshit. We walked around the medina to get back to the hotel.

Needless to say, we decided on our way back to book a guide for the next day (today). This was the best decision I’ve made in a while.

1 thought on “Inside the Medina”